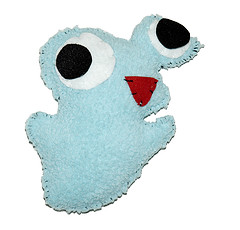 The other day Not So and the baby and I went over to our favorite kid shop (they sell kids there! Thank you, I will be here all week) to pick up some black-and-white stripey BabyLegs so I can continue with my master plan of turning my toddler into a wee little goth. I was still sick, of course, because I am stubborn at just the wrong angle and refuse to actually go to the doctor. So my ears were still quite plugged for our little outing. Plugged ears make the world seem somewhat surreal and disconnected, like watching the TV on mute. A lot like that, in fact. As an added bonus I had become completely unable to gauge the volume of my voice, so in addition to constantly saying “What?” I was also, probably, shouting like a crazy person. Fun!

So of course I decided to get into a conversation with the owner of LilyToad about my recent flirtation with toymaking, which led to her expressing a genuine interest in carrying Cranky Pals at the store, which is highly improbable but nonetheless true. So, yay! Also: eek!

My “inventory” (if by inventory you mean a stack of felt remnants and a bunch of batting) is woefully sparse, and I still haven’t figured out the damned sewing machine, so naturally my first instinct was to go out to Bolt on Alberta and touch all the fabric. We picked up some yummy fuzzy something-or-other (one of these days I’m going to keep track of which fabric is which) and then, bolstered by our brave foray into the outside world, decided to walk a mile and a half in the fresh air, which surely held health-giving powers. Yes?

No. I spent the next day sick, exhausted, and weeping, completely unable to do anything in the least bit useful and annoying Happy Fun Baby by my refusal to be fun and/or engaging. Did I go to the doctor, you ask? I did not. But, to be fair, I felt much better the next day.

I have been sewing like a mad fiend since then in an effort to make up for the days I lost to my stupid cold. I’ve been referring to it like that pretty consistently – my stupid cold – and I intend to continue until every trace of phlegm is out of my system. Which might be never. I’ll just be that girl with the perpetual case of the sniffles.

Related: I’m thirty-two, for Christ’s sake. Enough with this “girl” thing already. ::shakes head at self::

So I’ll be bringing a bunch of Cranky Pals over to LilyToad tomorrow; keep your fingers crossed for me.

4 thoughts on “church of the almighty pinprick”