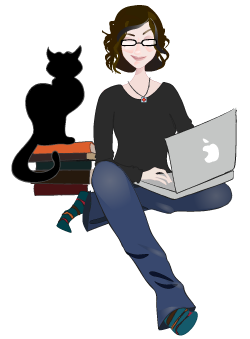 If your story is losing momentum, juice it up by inflicting some major changes on your characters. Crash the spaceship. End the marriage. Buy the monkey.

This may be one of the best pep talks EVER. I am totally buying the monkey. 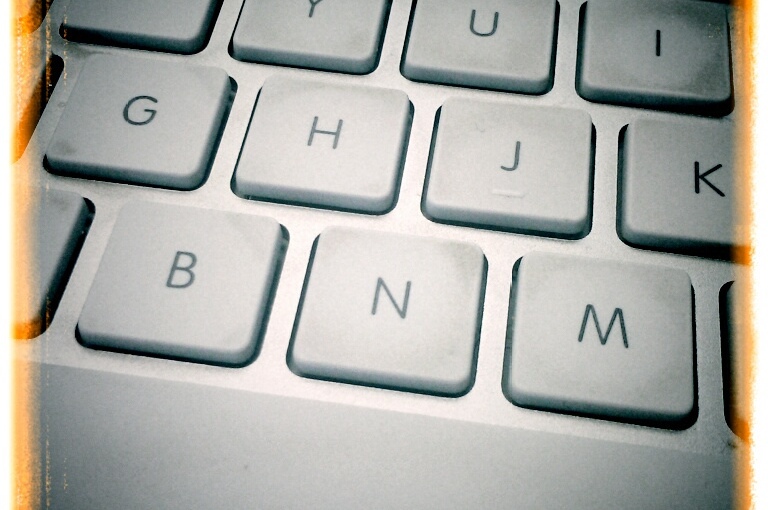 So here’s the stats, for those of you playing along at home:

I’m still ahead of schedule, but the last couple of days have been slooooow going. It’s not that I’m getting bored or anything, but I think I need to do a little bit more work on my time management skills. Today, for example, I’ve had my writing window open since I booted up my computer* but I keep clicking over to the “work” window. Which – I’m at work. I’m working. I get that. But when I can’t focus on writing or working, nobody wins.

But the bottom line is, the book is coming along FABULOUSLY and I feel crazy good about it.

*Yes, I actually had to boot up this morning. My laptop is all good things, but the ONE problem I have with it is its tendency to freeze the hell up and not respond to keystrokes.

My NaNo is showing. (NaNoWriMo shirt from The Office of Letter and Light online store.)

NaNoWriMo: Day 1 was a rousing success. I got almost 1700 words and can’t wait to do it again tomorrow. This is because I am a crazy person, but crazy people are fun, right?

Not So is watching Ghostbusters. This is what we do. We watch things.

In other news, I was really sick a couple of weeks ago with what may or may not have been swine flu (take that, specificity!) and realized one night I forgot to take my prozac. Since then I’ve continued to not take my prozac and I’ve felt kind of fabulous, so I’m counting that as a win. The prozac was great, actually, but it made me so freaking tired I could barely keep my eyes open, except at night, when I would just lay in bed with a million ideas running through my head. I enjoy my sleep, but I also enjoy not sleeping at appropriate times, kwim?

Speaking of sleep, I’m tired, and I have a TON to do tomorrow.

Someone should keep track of all my NaNoWriMo puns. Seriously. It would waste a good five minutes and give you something to do on a Saturday night which does not involve miserably hacking up bits of lung, which is what I’m doing. Oh, I know, waaaah. (Note to those who haven’t noticed yet: I get cranky when I am sick.)

But the last three days of fever and sore throat aren’t the reason I’m dropping out of NaNoWriMo a mere 8 days in. No, it’s much more prosaic than that: I have too much work to do. Work + active toddler + more work + housework = no time. Oh sure, I could something out to make time for writing. Let’s see: sleep? Well, I’m already knackered all the time, and despite all my best efforts I seem to prefer sleeping as long as I can rather than dragging myself out of bed while my angelic offspring slumbers. So that leaves either work of housework. We know what happens when I do not clean the house (SPOILER: the cleaning fairy isn’t real, and by the way, neither is the Easter Bunny) so that’s out.

So I could cut out early from work in order to write, quit maybe the part-time freelance gig I added on a couple of months ago during a particularly worrisome point in our financial cycle, but therein lies a funny realization: I’m unwilling to risk insolvency to further my writing career.

Huh. When did that happen?

The depressing part, of course, is that this means I Am Not A Writer. Which in turn means I wasted a crapload of time wearing lots of black and cramming together enough bad metaphors to fill not one not two but THREE mostly-unfinished novels, the latest of which I was really excited about, damn it. Er, plus the one I’m supposed to be writing now, which I’ve been planning for the past two years, which is even more depressing when you think about all the other things I could have been doing when I was scrabbling down notes and marking articles on Wikipedia and generally being way, way too full of myself.

I don’t know. I mean, I know failing at NaNo doesn’t mean I can never write again, but it’s a pretty good indicator of my commitment level. The way I look at it, I can either be willing to make sacrifices in order to be a writer, or I can quit whining about never having enough time to write. And I’m not sacrificing anything, am I?

Happy NaNoWriMo, everyone! Yes, I’m doing it again this year. This is because I am a crazy person.

I’m ridiculously excited. I’ve got all my notes bookmarked, copied into Scrivener, or saved. I’ve got a reference book lurking just to the right of my bed (it’s a psychological thriller, this year’s novel, which is an entirely new genre for me) and a bunch of back episodes of Cold Case Files at the ready. (Funny story: I realized before we decided to get rid of our cable that I had seen every single episode of Cold Case Files at least once, and could tell which case it was just by seeing the opening teaser. This cannot have done good things to my psyche.)

Want to know what else I use to squeeze 50,000 words out of my head in 30 days? I broke it down on Buzzverb for those following along at home. Whee. 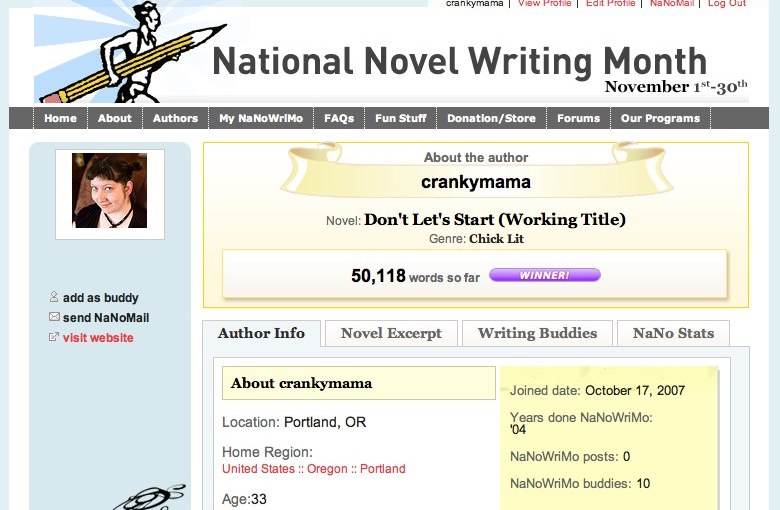 I am kind of in shock. But in a good way.